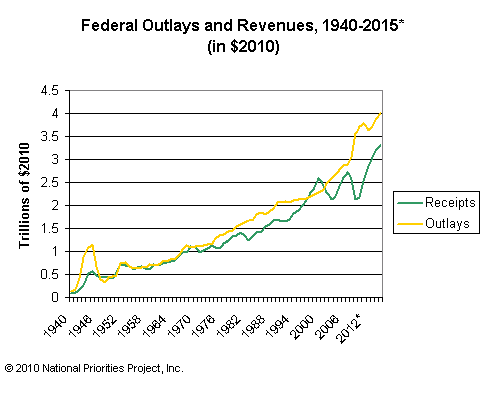 This data is standardized to what money is worth in 2010.  We can see from the past that the federal government collected enough in revenue to cover the outlays for much of the 1950s-1970s.  It is after the 1980s where the federal government began its habit of not collecting enough revenue to meets its spending obligations–and clearly, the  gap reaches ridiculous in 2008 and 2009.

The estimates for 2010 and beyond are estimates–and they look very optimistic to me given the economic outlook and the desire by some to continue cutting taxes.

But the data from the past suggest that returning to the tax rates of the 1950s and 1960s might help raise enough money to meet obligations. Alternatively, it might be helpful to cut spending so that the big ticket items are more in line with spending in the 1950s and 1960s.  Or perhaps, both increasing taxes and cutting spending are needed if the federal government is to get the budget close to balanced?