“Of the 13 recessions that the American public has endured since the Great Depression of 1929-33, none has presented a more punishing combination of length, breadth and depth than this one.

A new Pew Research survey finds that 30 months after it began, the Great Recession has led to a downsizing of Americans’ expectations about their retirements and their children’s future; a new frugality in their spending and borrowing habits; and a concern that it could take several years, at a minimum, for their house values and family finances to recover.” 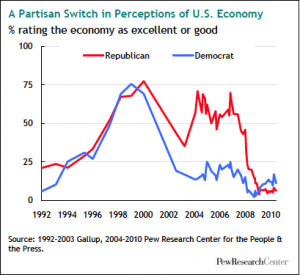 The survey also finds that more than half of the adults in U.S. labor force (55%) have experienced some work-related hardship — be it a spell of unemployment, a cut in pay, a reduction in hours or an involuntary move to part-time work. In addition, the bursting of the pre-recession housing and stock market bubbles has shrunk the wealth of the average American household by an estimated 20%, the deepest such decline in the post-World War II era, according to government data.”

Source: How the Great Recession Has Changed Life in America
A Balance Sheet at 30 Months
June 30, 2010

A related Report worth looking: One Recessionh, Two Americas
http://pewsocialtrends.org/pubs/766/poll-one-recession-two-americas-lost-ground-held-their-own