PEW had an interesting story about public opinion during the Great Depression. They noted the difference between then and now–during our great recession.

“Quite unlike today’s public, what Depression-era Americans wanted from their government was, on many counts, more not less. And despite their far more dire economic straits, they remained more optimistic than today’s public. Nor did average Americans then turn their ire upon their Groton-Harvard-educated president — this despite his failure, over his first term in office, to bring a swift end to their hardship. FDR had his detractors but these tended to be fellow members of the social and economic elite.” 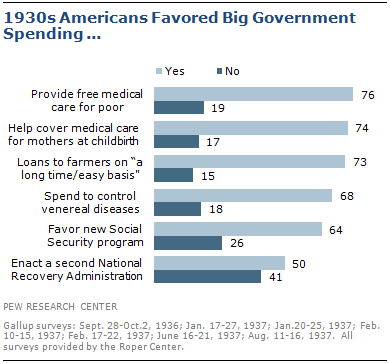 Source:
How a Different America Responded to the Great Depression