The founder of the social networking site Facebook is a far more prominent figure in the lives of America’s young adults than is the speaker of the House of Representatives. In a recent News IQ survey, 75% of adults younger than age 30 were able to identify Mark Zuckerberg as Facebook’s creator, while only 21% had a clue as to who John Boehner is. Among all adults, more knew the Facebook founder than the speaker, but the margin was much smaller (55% vs. 43%). Adults ages 65 and older are the only group to have more knowledge of Congress than of the social network: 55% of older Americans can ID the speaker while only 25% recognize Zuckerberg. An equal number (58%) of adults ages 50 to 64 can name the founder of Facebook and the speaker of the House. 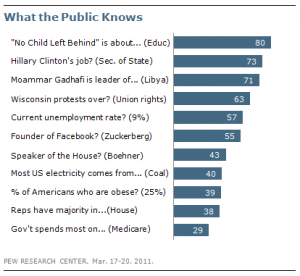