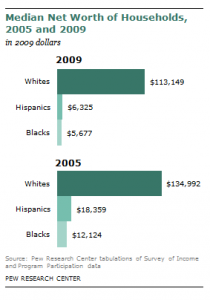 These lopsided wealth ratios are the largest since the government began publishing such data a quarter century ago and roughly twice the size of the ratios that had prevailed between these three groups for the two decades prior to the Great Recession that ended in 2009.

How is net worth defined? It is assets minus debts. Given the collapsing housing market, many people’s assets ain’t what they used to be. In addition, some people are finding that carrying debt is costing more now that interest rates credit companies can charge has been deregulated. At 20% or more, getting out of debt will be hard, even if the economy begins to provide enough jobs for everyone who wants one.

PEW also noted that the losses in net wealth has been greater among blacks and Hispanics. 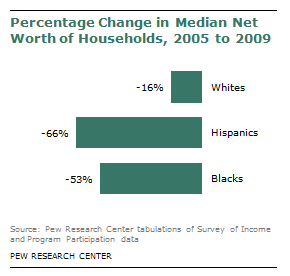 PEW writes:
“From 2005 to 2009, the median level of home equity held by Hispanic homeowners declined by half — from $99,983 to $49,145 — while the homeownership rate among Hispanics was also falling, from 51% to 47%. A geographic analysis suggests the reason: A disproportionate share of Hispanics live in California, Florida, Nevada and Arizona, which were in the vanguard of the housing real estate market bubble of the 1990s and early 2000s but that have since been among the states experiencing the steepest declines in housing values.