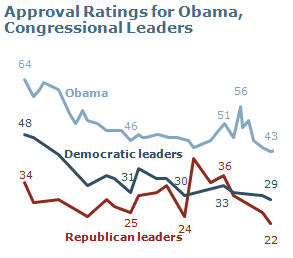 PEW came out with a new poll. The lead paragraph:
“The public is profoundly discontented with conditions in the country, its government, political leadership and several of its major institutions. Fully 79% are dissatisfied with the way things are going in the country. Even more (86%) say they are frustrated or angry with the federal government. Favorable ratings for both political parties are in negative territory and have declined since the beginning of the year.”
The chart tracks approval ratings for Obama and Democratic and Republican Congressional leaders. Things do not look good for either party.