“A Pew Research Center/Washington Post poll conducted Sept. 1-4 shows a steady rise since March – from 34% to 43% – in the percentage of those saying that the job situation is the economic issue that worries them most. Those citing the budget deficit as their top worry declined from 28% in May and 29% in July to 22% in September.” 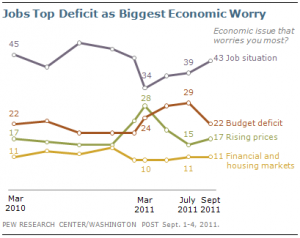 “The recent shifts in public opinion on the importance of deficit reduction come in the context of the bad economic news that is saturating Americans at the moment. The News Interest Index conducted Sept. 1-4 by the Pew Research Center for the People & the Press found that 61% of those surveyed said they were hearing “mostly bad” news about the economy.” 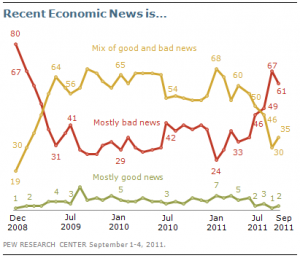