New poll from PEW: Low trust of the media

The public’s impressions of the national media may be influenced more by their opinions of cable news outlets than their views of other news sources, such as network or local TV news, newspapers or internet news outlets. When asked what first comes to mind when they think of “news organizations,” most name a cable news outlet, with CNN and Fox News receiving the most mentions by far.” 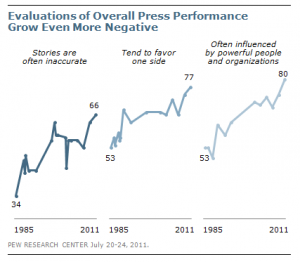 Still, they have more trust in the media than other institutions.
“By comparison, about half say they have a lot or some trust in information provided by their state government (51%) and the Obama administration (50%). Smaller percentages trust information from federal agencies (44%), business corporations (41%), Congress (37%) or candidates running for office (29%).” 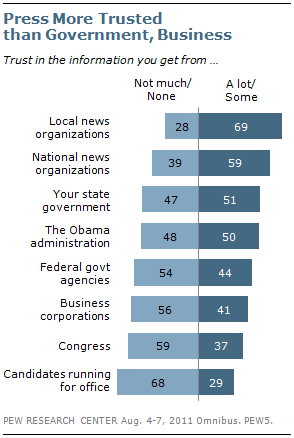 See full article at PEW Center for People and the Press