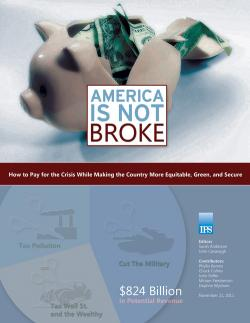 The Institute for Policy Studies just issued a report saying that America is not broke. They state: “While doomsday calls for drastic spending cuts have dominated this debate, we at IPS have a completely different view. In a new report, “America Isn’t Broke,” we argue that the crisis is an opportunity to harness the country’s abundant resources in ways that will make our economy more equitable, green, and secure.”
“We did not attempt to develop an exhaustive list of possible revenue-raisers or spending cuts. Rather, we focused on 24 fiscal reforms that we believe would go furthest to make the country more equitable, green, and secure. These reforms amount to an estimated $824 billion in potential revenue per year — seven times the total savings the supercommittee was tasked with producing.

The recommendations fall into three categories:
•Revenues that advance a more equitable society: New taxes on Wall Street, corporations, and individuals could, if rigorously enforced, raise more than $375 billion a year, while reducing reckless speculative activity and creating a healthier society. Between 1935 and the late 1970s, progressive tax rates and investments in infrastructure, education, and housing expanded the middle class and served as a foundation for decades of broadly shared prosperity. Today, opinion polls indicate widespread renewed support for proposals to increase taxes on millionaires, make Wall Street pay its fair share, and close corporate tax loopholes.
•Expenditure cuts that would make the United States and the world more secure: The Pentagon consumes more than half of U.S. federal discretionary spending, much of it on things that do not make us safer. While some jobs rely on this spending, a study by economists at the University of Massachusetts has shown that the military budget is a poor job creator compared to other forms of federal spending. Whereas $1 billion devoted to military production creates approximately 11,000 jobs, the same amount invested in clean energy creates about 17,000 jobs; in health care, 19,000 jobs; and in education, 29,000 jobs.2 We identify three areas where a total of $252 billion in cuts can be made to free up funds for job creation without risk to our national security. They are:

1.End the war in Afghanistan as we end the war in Iraq;
2.Reduce the sprawling network of overseas U.S. military bases; and
3.Eliminate programs that are obsolete and/or wasteful. All three of these goals are supported by the majority of Americans.
•Revenue increases and subsidy cuts that will create a cleaner environment: If all polluting industries were required to pay the full cost of environmentally harmful practices and products, they would have greater incentives to adopt improved green technologies and reduce our nation’s dependence on foreign oil. The Obama administration has promised to eliminate fossil fuel subsidies and yet U.S. taxpayers are still spending tens of billions of dollars per year on handouts to giant oil and other energy firms. We recommend eliminating this corporate welfare and introducing new taxes on pollution that could generate an estimated $197 billion per year in revenue.”