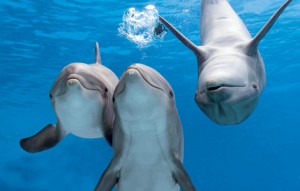 “Researchers in the United States and Great Britain have made a significant breakthrough in deciphering dolphin language in which a series of eight objects have been sonically identified by dolphins. Team leader, Jack Kassewitz of SpeakDolphin.com, ‘spoke’ to dolphins with the dolphin’s own sound picture words. Dolphins in two separate research centers understood the words, presenting convincing evidence that dolphins employ a universal “sono-pictorial” language of communication.”