The Corporations That Occupy Congress, by David Cay Johnston

Published on Tuesday, December 20, 2011 by Reuters, and posted to Common Dreams

“Some of the biggest companies in the United States have been firing workers and in some cases lobbying for rules that depress wages at the very time that jobs are needed, pay is low, and the federal budget suffers from a lack of revenue.

Last month Citizens for Tax Justice and an affiliate issued “Corporate Taxpayers and Corporate Tax Dodgers 2008-10″. ( link: http://www.ctj.org/corporatetaxdodgers/CorporateTaxDodgersReport.pdf)  It showed that 30 brand-name companies paid a federal income tax rate of minus 6.7 percent on $160 billion of profit from 2008 through 2010 compared to a going corporate tax rate of 35 percent. All but one of those 30 companies reported lobbying expenses in Washington. 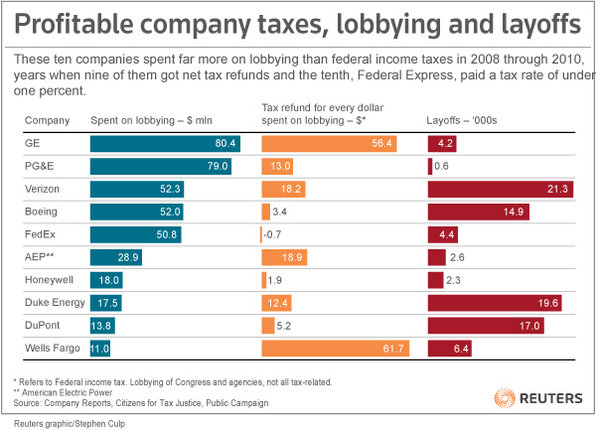 Another report, by Public Campaign, shows that 29 of those companies spent nearly half a billion dollars over those three years lobbying in Washington for laws and rules that favor their interests. Only Atmos Energy, the 30th company, reported no lobbying.

Public Campaign replaced Atmos with Federal Express, the package delivery company that paid a smidgen of tax — $37 million, or less than one percent of the $4.2 billion in profit it reported in 2008 through 2010.

For the amount spent lobbying, the companies could have hired 3,100 people at $50,000 for wages and benefits to do productive work.

The report – “For Hire: Lobbyists or the 99 percent” – says that while shedding jobs, the 30 companies are “spending millions of dollars on Washington lobbyists to stave off higher taxes or regulations.”

These and other companies have access to lawmakers and regulators that are unavailable to ordinary Americans.

Doubt that? Dial the Capitol switchboard at (202) 224-3121, ask for your representative’s office and request a five-minute audience, in person, at the lawmaker’s convenience back in the home district.

In more than a decade of lectures recommending this, I have yet to have a single person email me about having scored a private meeting with the representative called.

Corporations have vast resources to pour into ensuring access — resources that expand when little or no taxes are paid on profits thanks to rules they previously lobbied into law.

Companies form nonprofit trade associations, hire former lawmakers and agency staffers, and have jobs to dole out to lawmakers after they leave office and to friends and family while they’re in office. Thanks to the Supreme Court’s Citizens United decision, corporations can now pour unlimited sums into influencing elections. So can unions, but they are financial pipsqueaks compared to companies.

Then there are political action committees, or PACs, to finance campaigns as well as donations by executives and major shareholders.

Combine all this and you have a powerful formula for making rules that favor corporate interests over human interests, something that the framers of the U.S. Constitution understood more than two centuries ago.

James Madison wrote disapprovingly in 1792 of “a government operating by corrupt influence, substituting the motive of private interest in place of public duty” where eventually “the terror of the sword, may support a real domination of the few, under an apparent liberty of the many.”

The late U.S. president’s fears have come to life. For swords, just substitute police with rubber bullets, batons and pepper spray at Occupy demonstrations, including perfectly peaceful ones.

Company reports to shareholders show that among the 30 companies in the Public Campaign report, the 10 firms that spent the most on lobbying during the same three-year period fired more than 93,000 American workers.

Those firings took place in an economy that had five million fewer people with any work in 2010 than in 2008.

All those firings mean higher costs to taxpayers to support those unable to find work, including the more than 4.2 million Americans who are now persevering by applying for jobs after more than a year. Millions more have given up and are no longer counted among the unemployed.

Federal Express spent $25 million lobbying to protect a rule that makes it virtually impossible for its express delivery workers to unionize. That’s 67 percent of what it paid in taxes.

FedEx says it was “educating lawmakers” about a proposal “that would cripple competition in the express delivery industry and hinder our nation’s future economic success.”

The Teamsters, who represent drivers at United Parcel Service, say FedEx was protecting a special interest rule that shorts workers. UPS pays its unionized drivers 53 percent to 104 percent more per hour than FedEx does.

The United States already ranks second among modern nations, just behind South Korea, in the share of its workers in low-wage jobs while too many companies lobby for ever lower taxes, ever smaller wages and ever fewer worker rights to protect the mighty torrents of greenbacks flowing into their coffers. A better balance would make America better off.

David Cay Johnston is the author of Free Lunch: How the Wealthiest Americans Enrich Themselves at Government Expense (and Stick You With the Bill)