A nice valentine for Santorum.

According to PEW: “Rick Santorum’s has pulled into a virtual tie with Mitt Romney in the race for the Republican presidential nomination, according to latest national survey by the Pew Research Center for the People & the Press, conducted Feb. 8-12.” 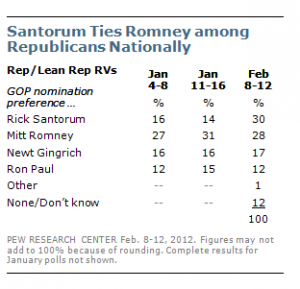 It is a tie but the question is whether it will last.  The Republican race has seen almost every candidate in the lead for 15 minutes before they crashed, but it is perhaps a good reason to let the primaries roll-out over time and dismiss early anointing of front runners.

A tremendous amount of money is being spent by these candidates. Yet, for all this money, it may not be of much use when it comes to winning the presidency.  Obama, at this point in time, is looking better than the Republican candidates.  Of course, there is a long time until November and a lot can happen. And no doubt, Obama will spend a ridiculous amount of money too.