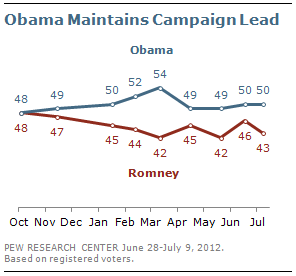 PEW Poll:
“Despite the stagnant economy and broad dissatisfaction with national conditions, Barack Obama holds a significant lead over Mitt Romney. Currently, Obama is favored by a 50% to 43% margin among registered voters nationwide. Obama has led by at least a slim margin in every poll this year, and there is no clear trend in either candidate’s support since Romney wrapped up the GOP nomination.

The latest national survey by the Pew Research Center for the People & the Press, conducted June 28-July 9, 2012 among 2,973 adults, including 2,373 registered voters, finds that Romney has not seized the advantage as the candidate best able to improve the economy. In fact, he has lost ground on this issue over the past month.”

The report goes on to note: “The electorate remains deeply unhappy with the way things are going in the country. Just 28% of registered voters say they are satisfied with national conditions, while two-thirds (67%) are dissatisfied, which is largely unchanged from recent months.”

The poll also showed that a higher proportion of respondents believe Obama would do a better job than Romney on all but two issues.–see chart: 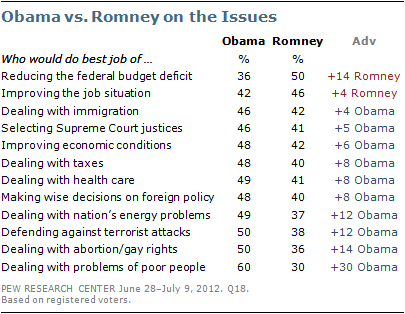