January 31, 2013: “The latest national survey by the Pew Research Center for the People & the Press, conducted Jan. 9-13 among 1,502 adults, finds that 53% think that the federal government threatens their own personal rights and freedoms while 43% disagree.”

The low trust in government continues, while 26% is a slight increase, it is nothing to rave about. Favorability of Congress continues to decline as well. The shenanigans with the federal budget and so called fiscal cliff probably were contributing factors.. 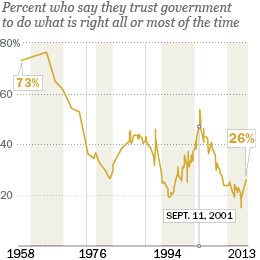 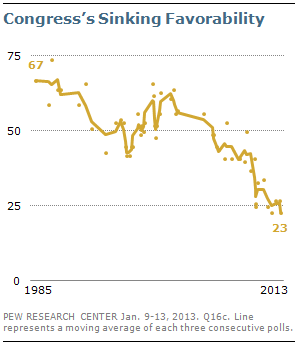 The big change is the shift in those reporting they feel the federal government threatens their freedoms and liberty. After more than a decade of federal laws and actions that have stepped on the 4th, 5th and 8th amendments that should protect our rights from searchers without a warrant, due process, and the right to trial, as well as banning cruel and unusual punishment, it is only now when there is talk of imposing some restrictions on gun ownership that some people now feel the federal government may be going too far. Curious. 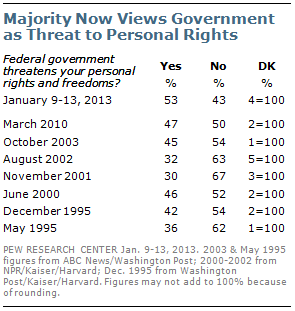 The margin of error for the January 2013 poll is 2.9%. It is possible that if they polled everyone, 50.1% might have said yes. It still would have been higher than the March 2010 result, suggesting that we have an upward trend since the low of November 2001, when just 30 percent said yes.

They provided the crosstabs to show differences based on demographics.