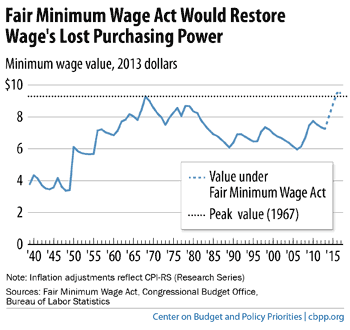 They write:
“The Senate is soon expected to consider a proposal to raise the minimum wage from $7.25 to $10.10 in three annual increments and then index it to inflation. The proposal — the Fair Minimum Wage Act of 2013 (FMWA), introduced by Senator Tom Harkin (D-IA) — also would raise the subminimum wage paid to those who also receive tips, which has been frozen at $2.13 for over two decades. The FMWA would provide low-wage workers with a much-needed boost to their paychecks: today’s minimum wage is 22 percent below its late 1960s peak, after adjusting for inflation. It also would help offset some of the unfavorable trends facing low-wage workers, including stagnant or falling real wages, too little upward mobility, and a deep deficit of bargaining power that leaves them solidly on the “have-not” side of the inequality divide.”