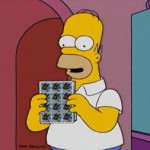 A survey by Entertainment Weekly magazine named Homer Simpson the greatest character created for film or television during the past 20 years, beating out Harry Potter.

No information about the survey. Still, this cartoon has been around for forever it seems–so it must still have great appeal to both adults and children.