Common Dreams had an interesting article as the budget deficit as crisis story picks up traction. “Who Ate the Dessert? Deficit Mania Ignores Growth of Income Gap by Neil DeMause.

Fiscal policies of the 1930s stabilized the share of the top earners for over forty years.  And then it spirals up very quickly starting in the 1980s. It dips in 1987–when we had a stock market crash, stabilized in the 1990s when the federal government ran budget surpluses and then skyrockets after 2000.

It would be interesting to look at the annual budget deficits over this same time period. Much hypothesis is that we would see some similarities, at least from the 1950s.

While the pundits say raising taxes is not viable, polls have shown that the majority of Americans favor raising taxes on those who earn more than $200,000 (see posts on this site)

The author also looks at the marginal tax rates during this time period. The prosperous 1950s had the highest tax rates and then we see the sharp decline of the top marginal rate after 1980. This article does not delve into other policies that reduced the amount of tax paid by the wealthiest Americans and the impact of tax expenditures. 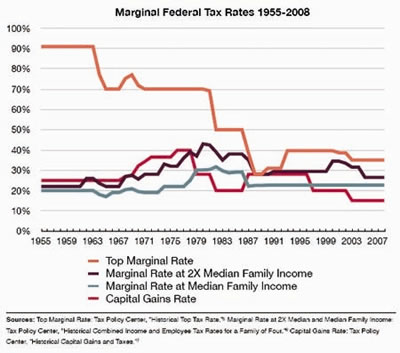