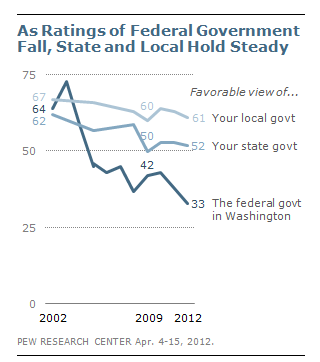 The favorable rating for the federal government has fallen to just 33%; while nearly twice as many (62%) have an unfavorable view, according to the latest survey by the Pew Research Center for the People and the Press, conducted April 4-15. By contrast, ratings of state governments remain in positive territory, with 52% offering a favorable and 42% and unfavorable opinion of their state government. Local governments are viewed positively by roughly a two-to-one margin.