From the report: “The public was asked four questions to measure knowledge of political news and current events. The questions concern which party controls the House of Representatives, the current unemployment rate, the nation that Angela Merkel leads and which presidential candidate favors taxing higher-income Americans. Overall, just 14% of the public got all four questions right. Slightly more people (17%) got all four wrong. Most news audiences, however, scored substantially better than the public.”

Of course, watching the news does not mean people are focusing on political events. The PEW study found that the majority of people  watch the weather reports “very closely.” None of the other topics comes close. 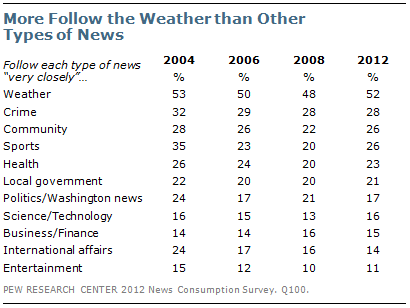