Politics and taxes. So the latest flap in the news is presidential candidate Romney’s statement about how the 47% who don’t pay taxes see themselves as “victims,” are dependent on government and do not understand personal responsibility.

True? What does the data say? From all accounts, 47% did not pay federal income taxes is accurate.

Is that too much or is it unfair? That is a judgmental call.

Are these 47% living off the government? Well, there is some data that can help us determine the truthfulness of that statement.

In a recent post, I tried to figure out how much income defined the middle-class household. With 25 percent of the households earning less than $25,000, they are very likely to have little or no federal tax liability and might, in fact, be eligible for earned income tax credits. That policy was designed to help people who work at low-wage jobs.

It is also true that with the median income around $50,000–well, with deductions for mortgage interest, equity loan interest, property tax deductions, child care, and medical deductions, it is not surprising that some households have more deductions than tax liabilities. They would therefore get a refund of all taxes withheld.

But that is just my general assumption. So I poked around to see if others had gone deeper.

Here is some better data. It looks like 28% of households had taxes withheld but because of various deductions, got full refund checks. That leaves us with 18 percent of all households who neither paid taxes or paid withholding taxes-meaning that did not work for an employer. 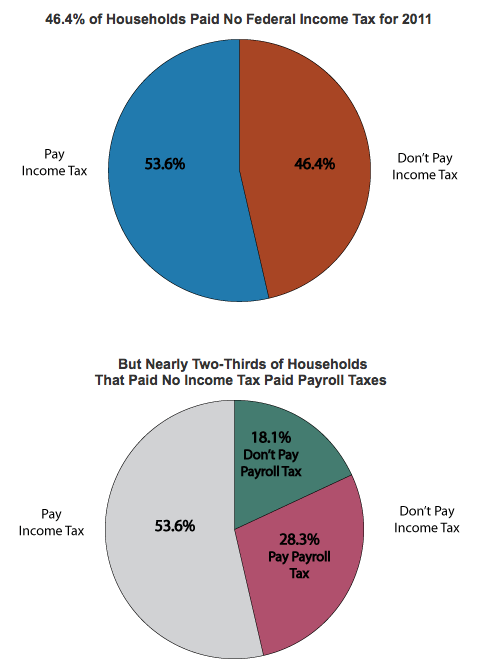 Kevin Roose at NYMag puts the data into words:

“But back to the 47 percent. There are two primary ways to pay no (or negative) federal income taxes. The first is to be poor, and the second is to be elderly. In 2011, of the 18.1 percent of American households who paid no federal tax (meaning, no federal income or payroll tax), more than half were elderly, and most of the other half were non-elderly people making below $20,000 a year. The other sliver, roughly one in 20 non-payers, were people who made more than $20,000 in household income.”

“The reason being poor helps is because, with a combination of tax credits (like the earned income credit and the child credit) and deductions, many people earning under $20,000 a year can zero out their overall rate. The primary reason being elderly helps is that Social Security benefits aren’t taxed as income, so if all (or most) of your income comes from your monthly Social Security check, your taxable income is marginal or non-existent.”

The chart, however, does not match the write-up, so that needs to be fixed.

Still, the data is available to understand the complexity of taxes, who pays, who doesn’t, and why. Surely presidential candidates have enough resources for folks to check the data before candidates make these kinds of statements.

Ideally, this might spark a deeper discussion about taxes, write-offs, and what constitutes fairness. I am not optimistic though. But for a politician to write-off 47 percent of Americans and imply that they are leeching off the other 53 percent–well, I am not going out on much of a limb to say that attitude will not win elections.