This from Paul Krugman’s blog: Taxing the Rich post

He writes: “First, over the past three decades we’ve seen a soaring share of income going to the very top of the income distribution (right scale) even as tax rates on high incomes have fallen sharply, with the recent Obama increases clawing back only a fraction of the previous cuts.” 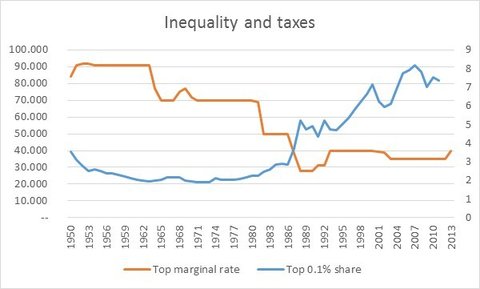 The essential question is simply this:  what income distribution is best for America as a whole? Does inequality hurt the economy, and if so, how much income inequality can be tolerated before it harms the economy? Given that we have a consumer-based economy, if people are limited in the amount of consumption because they have limited resources, at what point does the economy stall? At what point does it make an economic recovery fail?

The same question can be posed about taxes. What is the best tax structure for America as a whole? There is no question in my mind that the Bush-era tax cuts were a huge failure from the perspective of both the federal deficit and the debt. We quickly went from a budget surplus to a budget deficit, that got worse as the economy continued to weaken. Other factors played a role, but when the budget started to cross into the red, and especially with the costs associated with two wars, the tax cuts should have been canceled.

Of course, other factors caused the economic crash. Fixing it is clearly not easy. We have had a high rate of unemployment for over five years (and yes, there are debates about how accurate that measure actually is), with no end in sight in what economists are calling “a jobless recovery.” No jobs, no income for many people.  No income, no consumption. No consumption, a weak economy.

“This has nothing to do with envy, or a desire to punish the rich, or anything other than a recognition of tradeoffs: if we choose to raise less revenue from the rich than we can without hurting the economy, we will be forced either to raise more taxes from or provide fewer valuable services to everyone else.” Here he is trying to redefine the debate. Those opposed to tax increases for the rich have tried to spin it in terms of envy and turn the argument into an ad hominem fallacy–a classic form of deception.

A good research project would be to determine what is known about the relationship between tax rates and the economy. What would be interesting is to overlay the GDP over time to see if there is a pattern.  If researchers were serious, they would use stronger statistics– measures of association.   But there are no new questions–just a lack of awareness of the research when it is an issue outside of one’s area of expertise.

Krugman links to a study by the Economic Policy Institute published April 2, 2013 by Andrew Fieldhouse: “A review of the economic research on the effects of raising ordinary income tax rates: Higher revenue, unchanged growth, and uncertain but potentially large reductions in the growth of inequality.”

Among his findings show in his executive summary:

Of course, you would want to read the detail:  Read Report Here