The Center on Budget Policy and Priorities has provided more information about the latest Census report on Poverty and Health Insurance. Once chart compares the income shares by quintiles of 1967 and 2012. 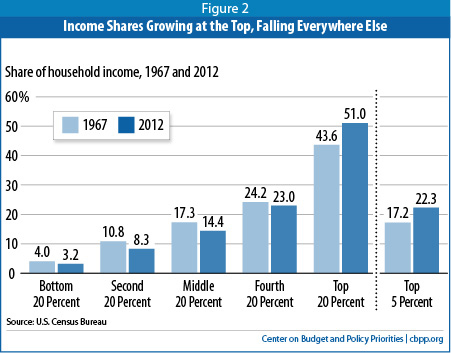 The article notes that there may be some challenges in accurately capturing the income of those at the very top, and therefore accurately measuring changes. They write:
“Other data suggest the Census figures may underestimate the rise in inequality. Census trends on income inequality must be regarded cautiously because of large gaps in the Census income data, especially the omission of substantial income going to people high on the income scale. For example, Census does not collect data either on capital gains income or on salaries above $1,099,999; an individual whose salary rises from $20 million to $25 million between 2011 and 2012 is recorded as earning $1.1 million in both years.”