PEW has put together a great chart that looks at generational differences in views on gay marriage over time. It should not come as a surprise that the younger generations are more accepting of gay marriage than the older generations.
Click Here to check out this chart 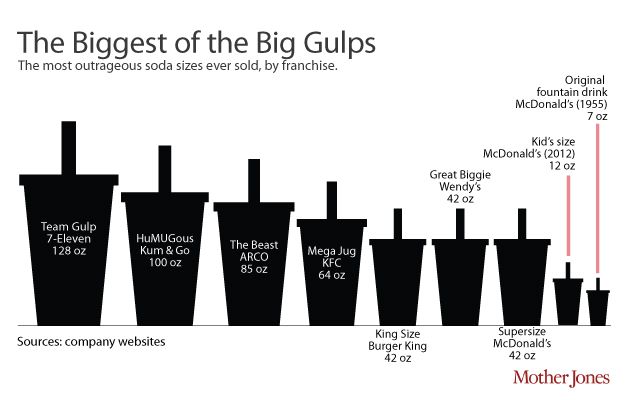 Americans appear to be losing the fight against excess weight. The trends have been generally upward since the 1970s–with spikes in the 1980s and 1990s– although they appear to have leveled off.  The complexity of nutrition and weight gain is astounding and there are many theories, along with many diets, all too often presented as absolute fact. But science does not have this nailed down. So it is possible to sympathize with the American Beverage Association who have had to defend its sugar-sweetened beverages from attacks.

Of course, a press release does not have to show where the numbers came from or verify their accuracy. To do that, we would need to go to other sources or to make some judgments. END_OF_DOCUMENT_TOKEN_TO_BE_REPLACED

Pew released a new report by Kim Parker and Wendy Wang: Modern Parenthood: Roles of Moms and Dads Converge as They Balance Work and Family. 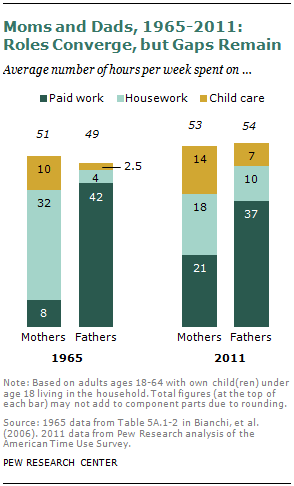 They note in their overview: “The way mothers and fathers spend their time has changed dramatically in the past half century. Dads are doing more housework and child care; moms more paid work outside the home. Neither has overtaken the other in their “traditional” realms, but their roles are converging, according to a new Pew Research Center analysis of long-term data on time use.”

How do you stack up? Take the Quiz: Click here

This video came across my computer screen today.  It is taking graphic representation to a new level.

Check it out: Video by Evan Klassen
Of course, it helps to know what he defines as “wealth.” It means tracking down the Harvard study as a starting point. Still, as an example of the use of graphics, it does a good job of presenting a complex set of data.More data can be found at Mother Jones: It’s the Inequality, Stupid. Mother Jones puts it all in charts.

This is the chart that the video leads with–comparing the different in perceptions and reality about wealth distribution.

END_OF_DOCUMENT_TOKEN_TO_BE_REPLACED 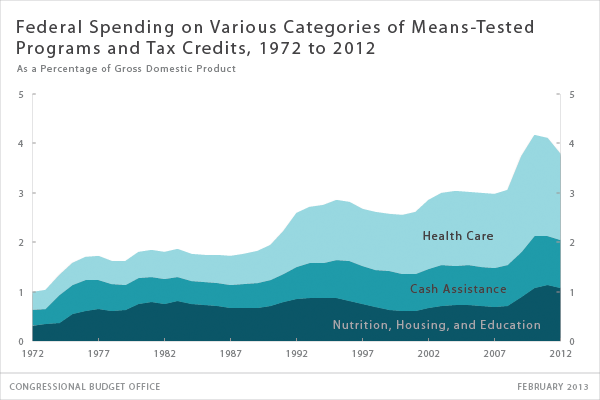 “The federal government devotes roughly one-sixth of its spending to 10 major means-tested programs and tax credits, which provide cash payments or assistance in obtaining health care, food, housing, or education to people with relatively low income or few assets. Those programs and credits consist of the following: Medicaid, canadian pharmacy la roche posay The low-income subsidy (LIS) for Part D of Medicare (the part of Medicare that provides prescription drug benefits), The refundable portion of the earned income tax credit (EITC), The refundable cheap viagra online portion of the child tax credit (CTC), Supplemental Security Income (SSI), Temporary Assistance for Needy Families (TANF), The Supplemental Nutrition Assistance Program (SNAP, formerly called the Food Stamp program), Child nutrition programs, Housing assistance programs, and The Federal Pell Grant Program. As shown in this report and an accompanying infographic, in 2012, federal pharmacycanada-rxedtop.com spending on those programs and tax credits totaled $588 billion. (Certain larger federal benefit programs, such as Social Security and Medicare, are not considered means-tested programs because they are not limited to buy viagra online people with specific amounts of income or assets.) Total federal spending on those 10 programs (adjusted to exclude the effects of inflation) rose more than tenfold—or by beta blockers and cialis an average of about 6 percent a year—in the four decades since 1972 (when only half of the programs existed). As a share http://cialisgeneric-toped.com/ of the economy, federal spending on those programs grew from 1 percent to almost 4 percent of gross domestic product (GDP) over that period. (For ease of presentation, this report frequently uses the term “programs” to encompass both the spending programs and the tax credits.)” Check out chart:Click Here

Gun control is definitely on the policy agenda.
And attitudes are shifting. Here is the latest gallup poll:

The New York Times posted some charts to capture 2012.
Interesting use of graphics;
Check it out: here

Of course, there could be some spin. Take the social security chart. According to the Social Security Administration:
“The average monthly Social Security benefit for a retired worker was about $1,230 at the beginning of 2012.”
Social security administration
I could not find a median reported. He reports the median income at $20,500 but it is not clear to me where he got that number.
Looking at his interpretation of this chart, it seems clear that the author is a proponent of changing the way cost of living increases are calculated.
Interpretation is often in the eyes of the beholder. For example, he does not point out that under either index, the median income (however that is defined and actually is) did not keep up with inflation after 2006.

It is true that as a general rule the median (the mid-point of a distribution like income) is a more accurate description of the center of the distribution. Very high incomes, like that of a Romney, Buffett or Gates, can greatly distort an average. However, there is not a big range here. According to Social Security Administration, “The maximum benefit depends on the age a worker chooses to retire. For example, for a worker retiring at age 66 in 2012, the amount is $2,513. This figure is based on earnings at the maximum taxable amount for every year after age 21.”
OK. So the next question: what is the maximum taxable amount? Social Security states: “For 2012, the maximum amount of taxable earnings is $110,100. In 2013, the maximum amount of taxable earnings will be $113,700.”
There is no minimum amount, although they won’t pay less than $1. END_OF_DOCUMENT_TOKEN_TO_BE_REPLACED

The New York Times published the results of 10 months of research looking at state, local and county taxpayer money that goes to businesses.
Interesting way to display day.
Government Subsidies to Businesses